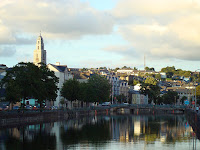 Morning
This morning's Pontifical Mass originally was scheduled to commence with the Office of Terce at 11.30. This was revised to 11 am but in fact the Mass actually commenced at the original time of 11.30. At around 2 hours and 25 minutes into the proceedings James Macmillan's a capella motet Christus Vincit was heard during the communion. The expected Macmillan trademarks were very evident- an uncanny ability to make even the driest acoustic sound quite resonant together with decidedly 'celtic' decorative figuration in the upper voices. Given the nature of the text you would have expected something quite triumphalistic but Macmillan has chosen to underplay that aspect of the text in favour of a more reflective setting. The grandeur of the text was more expressed through the subtle use of harmonic shifts and ornamentation rather than through sudden changes in tempo and dynamic.
Thomas Lacote's improvisation before the final Te Deum took up some of the stylistic features of the Macmillan setting. The setting of the ordinary was Palestrina's Missa Papae Marcelli matching well the material discussed in yesterday's session. Within the context of this Pontifical High Mass it was a solid reminder of the essential sobriety of the Roman rite when freed from unnecessary ornamentation, fussiness or vain display.
Afternoon
The format for the afternoon session was slightly modified to allow questions between each paper and a brief break. First Dr Andreas Andreopoulos presented a paper in two parts. First he examined the theory of music in the Byzantine tradition, particularly the modal system and noted the differences between the sacred and secular musics dependant on the same system. He noted that in various orthodox communities, that had previously adopted more westernized forms of music, there was currently a revival in the traditional chant. The second part of Dr Andreopoulos' presentation was the performance of a selection of pieces from the sacred and secular repertoires illustrating the points from the first half of his talk.
The second paper came from Don Alberto Donini of the Diocese of Brescia. His paper, Gregorian Chant in the Liturgy according to Joseph Ratzinger/ Benedict XVI, extracted from the considerable references to music those specific to the Gregorian repertoire. At the essence of the paper was the identification of spiritualization as being essential to the Holy Father's understanding of chant. This he sees not only in the varied origins of the chant genre being brought into a cohesive spiritual form but also in a Christological sense by the which the chant itself participates in the incarnation of the logos; 'Christ the Word of God, incarnate in sound.' In the following question session an interesting exchange took place between Donini and Andreopoulos over the misuse of incarnation by some liturgical theologians to embrace anything as acceptable.

Finally James Macmillan spoke, or rather gave his manifesto for the future, in a talk entitled The Spirit of the Liturgy: Rejoice in Tradition and Embrace the Future. Macmillan obviously knew he was 'preaching to the choir' with much he said but seemed a little more circumspect than he has been elsewhere- probably considering the presence of three bishops in the room by this stage. He concentrated on the problem of the value of 'beauty' and it's general neglect, indeed deliberate exclusion of the concept, from much liturgical consideration in recent years. In the context of the general alienation that occurred between Church and professional musicians, in the 1960s, Macmillan touched on the misinterpretation of participatio actuoso that has prevailed and also noted the considerable pressure he had recently been subjected to from 'modernist liturgists' in relation to his own work for the forthcoming Papal Visit to Britain. The session concluded with a personal reflection from Archbishop Burke who, speaking of some of the Holy Week Chants he remembered as a child, noting how appropriate their style seemed to the occasion. 'We have been robbed of a gift given by God' he recalled.

In a  revision to the published schedule finds Dom Samuel Weber's paper Benedict XVI on the Psalms in the Liturgy now in the Monday morning session.