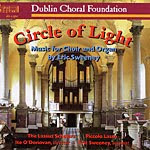 The Lassus Scholars made an enormous contribution to the recent FOTA III conference in Cork (10-12 July). Over the three days they provided some of the most extraordinary readings of both 'classic' sacred repertoire and some newer music as well. The standard of the performances were remarkable. Whilst used to hearing such quality on recordings, where the possibility of retakes is a blessing, such high standards, given the difficulty of the music, is unusual within the liturgical context. Talking to their director, Ite O'Donovan, afterwards I asked about new Latin sacred repertoire and she very kindly provided Jubal's Review with a copy of this significant CD.
This recording contains the music of Eric Sweeney (b. 1948). The recording opens with his organ piece Le Circle de Lumiere (1999) and includes three English carol settings (SATB unaccompanied), and a selection of Sweeney's other organ music. An English Jubilate Deo and two other motets are presented. Sweeney has noted that his compositional style changed after his Second Symphony (1985-1987) as he moved towards a more 'traditional' use of tonal centres. This move can be clearly heard in the Missa Brevis (1986) which is our main interest. Sweeney mentions minimalism, particularly Reich, as having a definite influence on his compositional style. Whilst this is clearly heard is his use of repetitive figures the influence of Flor Peeters is just as prominent in the way he develops melodic fragments and builds chords from modal scales.
Sweeney provides the following note;

'Written in 1986, and subsequently revised, the Missa Brevis for two-part choir is a setting of the Kyrie, Gloria, Sanctus/Benedictus and Agnus Dei of the Mass. Frequent use is made of canonic writing, sometimes in inversion, in the voice parts while the organ plays a largely independent part throughout.'

It will be no so surprise that this immediately invites a comparison with Benjamin Britten's Missa Brevis (1959) not only in the similar forces involved but also in the canonical writing and the independence of the organ part. There are significant differences however; Sweeney's work is slightly longer lingering over passages of the text which the Britten work, by comparison, makes a rather perfunctory, almost indecently hurried, setting. The organ part in Sweeey's setting would seem to be more accessible to the average organist.
The performance from Piccolo Lasso (all aged between 9 and 14) is solidly professional. The opening of the Kyrie slightly puzzled me as there seemed to be two pronunciations of the word Kyrie being executed, one favouring a Greek pronunciation in the other  the latinate. The performance of the Gloria is sharply precise and gives a good example of what these young singers are capable of. Leaps from low unisons to high divisi chords are handled with apparent ease, indeed intonation throughout is spot on. The recording itself [DDD] is very good and the placement of voices within the mix is very satisfactory making every syllable and note uttered count.  The recording was made in Christ Church Cathedral, Waterford, in October 2003.
Recent Latin Mass settings for these forces are relatively rare and Sweeney's Missa Brevis deserves to be heard much more frequently. The score is available through Beaumaris Publications (Rockfield, Carrigavantry, Tranmore. Co. Waterford). Sweeney has composed several works under this title so be specific, when enquiring, that you are looking for the 1986 Latin Missa Brevis. For further information on the Dublin Choral Foundation and its important continuing contribution their web page is linked with the name. This recording is available on the DCF site and also on Amazon.
Posted by Fr Raven at 4:21 AM