The Christian West and it's Singers 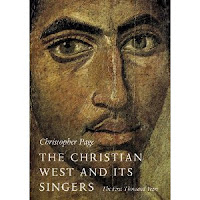 Please do not read Christopher Page's final paragraphs first. Indeed it's probably best to leave them right to the end as he intended it. Unfortunately they place the book more in its own cultural milieu rather than that of it's subject. It's a shame because this masterly work, which must set a new standard, is of such importance that reader shouldn't be put off by transitory Europhile sentimentality.
Page dares to go where few have trod before. Certainly there is some cross over with James McKinnon's final offering The Advent Project. That earlier work, a decade ago, cast considerable light over the darkness of the late 7th century in musical terms.  Page goes much further creating a coherent history across the first millennium. I say creating because the size and breadth of this work means that many of his conclusions will be the basis on which future work will be done. Research and explorations, kite flying perhaps, that just could not have been done, indeed envisaged, without this book having been there first and cleared the way.
Christopher Page (born 1952) is an expert on medieval performance practice, a guitarist and, I gather, a composer. He is Vice-Master of Sidney Sussex College, Cambridge  and University Reader in Medieval Music and Literature. He is the founder and director of Gothic Voices and serves on the editorial boards of the journals Early Music (OUP) and Plainsong and Medieval Music (CUP). His communication skills, honed through years of teaching and broadcasting, are clear and well directed towards a wide audience. In this volume he has shown considerable care in presentation opting to place the footnotes at the end of the text, so not to visually disrupt the flow of the narrative. A series of excursions, further support of his research, are placed at the ends of chapters rather than being integrated into the main text. It makes for a very readable volume of around 350, 000 words.
Page, of course, is wandering into difficult territory. The ordinary evidence for musical examination, the scores, have not survived. In fact they probably never existed as the modern mind would have defined them. Page draws on a variety of disciplines for his purpose. Thus the epitaphs for early Christian lectors, the trade movements in the ancient world, indeed the origins of personal names themselves become tools to elucidate a picture of how Christian music worked in the West. ('Notation' itself doesn't appear until 370 pages in.) Now, standing on their own, each piece of data may seem to be of interest in a small way but in Page's hands they are drawn into a bigger picture. In a sense he has assembled his argument from many tessura to form one mosaic. It is the detail of this work which is quite breath taking.
Apart from the 'paucity' of evidence Page notes another fundamental problem with the material that may be considered 'secondary' sources for a history of singers.

The task of trying to form an impression of Christians and their singers in the first centuries is like assessing the position of Muslims today using only the websites of Islamic extremists and official pronouncements about the War on Terror. [p, 523]

But Page was obviously aware of this before he penned the opening chapters. He's successfully counterbalanced any polemic on the part of 'official' sources with the wealth of 'domestic' material he has employed, material without intent to proselytize or convince indeed material that would have surprised its originators if they knew it was to be used in this way. Concerning the transmission of the chant repertoire Page opines;

A comprehensive map of connections, if only we could draw one, would probably be as much a chart of friendship and alliance between cathedrals and abbeys as a map of direct intervention by the emperors. [p. 532]

Page's story then is told, not principally through the lives of the rich and powerful, but through the lives of the singers. He clothes these lives with the cultural environment in which they worked and lived. In Part I we are introduced to what must be considered the 'domestic' Church - a world which singing and declaiming a text were the same act. Here, in the world of the lector-cantor, a picture is drawn with the lives of some early practitioners. Some surprising information is brought to light; the preference for the purity of the unbroken voice, in some places, for the declamation of scriptural texts; the growing singing  ministry of the deacon almost threatening to usurp the older ways. Part II covers the rise of the new kingdoms with the weakening of Roman centrality. A particular emphasis is made on the ways of teaching singers and their institutions. Part III examines what we know of the composers/ choirmasters operating in the final centuries of the first millennium. Guido d'Arezzo's works (Chapter 20) are firmly placed within a larger context of clerical reform with the revelation of a fifth treatise, often misattributed, which leaves little doubt that a major impetus for a more specific form of notation lay in the considerable amount of time that clerics were 'wasting' in memorising the repertoire they had to use on a daily basis.
But what of a continuous tradition? The book's attitude is simple. A clear direct line cannot be traced. However there are several starting points which, over the centuries converged. So Christian music found it's roots in a variety of sources, the local community adopting and modifying, sometimes outright rejecting, the musics that surrounded it. Similarly the ecclesial structures in which the cantor-lectors first ministered owed much to the familial structures already in place in various provinces of late antiquity and continued to have an influence through to the last dwindling scions of old Rome, residing in Gaul but, remembering past glories half a millennium later. Through these strands however there was innovation which cannot be explained but by the genius of the singers.
The presentation of the volume is first class, well bound, good paper. Typesetting is clear and accurate (I noticed what appears to be a lone 'typo' on p. 487. (Surely Rudof should read Rudolf?) The illustrations are apposite and, indeed, largely new to me. Colour has been used which is certainly essential to some of the points made. More than one reviewer has noted the physical weight of the volume. A problem perhaps for the reviewer 'sneaking' chapters whilst on the London Underground but less so for where the book will find it's home- on the desk of all those interested in this area.
Please do not, do not, read Page's final paragraphs first. Indeed it's probably best to leave them right to the end as he intended it. Better still strike them out and draw your own conclusions. I found his closing comments rather out of character to the rest of the text. Throughout he had maintained a scholarly distance observing the facts with a clear objective eye. To lapse into personal interpretation was perhaps not the best way to end such a fine bit of scholarly writing.
Dom Alban Nunn

In preparing this review reference was made to the Wikipedia entry for the author and material on the websites of OUP and CUP.
Posted by Fr Raven at 2:02 AM