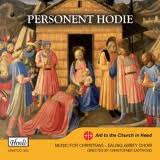 Whilst strictly off topic, recent Latin text material is lacking, this recording may be a useful gift for the upcoming season. Nineteen tracks cover the Advent-Christmas period with a few surprises but mainly presenting an anthology of what has been presented in this groups annual Christmas Carol Service over the years. The Choir has a recording 'history' with Herald producing a recording of the Bruckner motets some years ago under the direction of Jonathan Brown. Since then, and on other labels, there has been an Dickens themed recording (music and reading) under Richard Ncholson's directorship and a recording of largely modern English music with Timothy Blinko.
The offerings from the organ really stand out on this recording. I'm presuming Hogan is the performer on these tracks. Three Bach chorale preludes, Nun, komm, der Heiden Heiland (BWV 659), In Dulci Jubilo (BWV 608) and Wie schon leuchtet (BWV 739) are interspersed and really show the Rushworth and Dreaper instrument off for what it can do. Otherwise the choral tracks are a selection from chant through to some current arrangements of traditional material. Full texts are given in a simple booklet.
The recording quality (DDD) is very good. At one point I wondered if the accompaniment was too prominent due to the placement of the microphones but this proved to be momentary. Ealing Abbey is not an easy building to record in. Being directly under the Heathrow flight path often makes for recording in short takes at strange times of the day. The sound of the boys has changed over the years and Eastwood is dealing with a somewhat 'slimmed down' ensemble. This sounds very clear in the recording acoustic which is somewhat more resonant than the weekly worshipper might recognise.
Two reasons for a further 'plug'. (1) Proceeds from the recording are going to a very worthy cause; Aid to the Church in Need. You can have little doubt that your alms will not go where they will be misused. (2) It is a very competently assembled compilation with a combination of well known material, appropriate organ music, and an interesting marking point for where this choir is at the moment. The HAV website entry for this release is here.
Posted by Fr Raven at 3:27 AM